The Unraveller of Angels 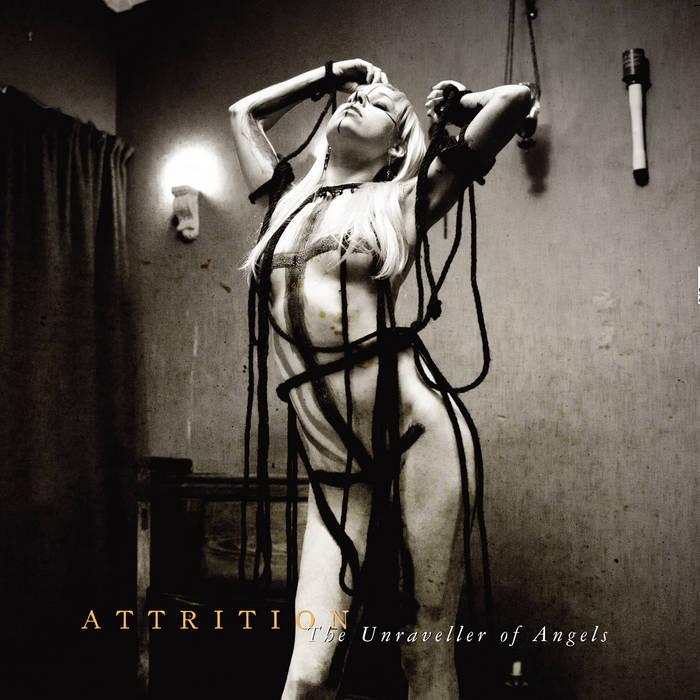 ATTRITION - The Unraveller of Angels

Founder Martin Bowes has teamed up with US singer Tylean on vocals and created 10 new works varying in style from industrial to gothic to dark ambient soundscapes, whilst lyrically continuing his exploration of introspective themes of life, love and death...

and a video by Daniel Gouyette for One Horse Rider
www.youtube.com/watch?v=kT6cBw30itM

Attrition: 'The Unraveller of Angels' – Fearnet.com

Just last month, UK musician Martin Bowes gave us a taste of the latest offering from his legendary gothic/industrial music project Attrition, in the form of the digital EP Narcissist (check it out here), which represents the band in a more intense, heavy beat-driven mode while still maintaining the hypnotic ambient soundscapes that Bowes brings to the game. Ever since hearing him describe the band's new stylistic direction in an earlier interview, I've been anxious to hear the entirety of The Unraveller of Angels, the band's highly-anticipated sixteenth studio album. The roster of guest artists on this record is impressive enough – Tylean, Mona Mur, Matt Howden, Ian Arkley, Jyri Glynn and Erica Mulkey are among the contributors – and many musical genres are represented, from straight-up electro to neoclassical to dark ambient noise. That said, Unraveller is still pure Attrition: dark, mysterious and sexy at any speed.

The seriously creepy intro “The Unraveller” sets the beautiful but nightmarish tone with its icy piano sprinkled over distorted, contorted vocal samples before launching us into the bumping drum & bass and synth surges of “Karma Mechanic,” with Bowes trading vocal lines with gothic legend Mona Mur. “Narcissist,” which we've covered previously in its many EP variations, appears in its twitchiest, most urgent version here. Eerie cello, piano and violin twist through “Histrionic!” with distortion effects often transforming the string instruments and ambient female vocals into musical wraiths. String instruments also play a dominant role in “One Horse Rider,” turning a minimal beat pattern into a dance of doom, and a pensive cello blends with snarling guitar licks in “Snakepit.” In a cool twist on the pattern, Jyri Glynn's effects-heavy electric violin weaves a flute-like tone (reminiscent of Vangelis's iconic Blade Runner theme) through mid-tempo synth rhythms and deep guitar chugs in “Suicide Engineer”...

The full compliment of strings and piano comes to bear in “The Causal Agent,” joined by a deep, heartbeat-like synth bass pulse, resulting in the album's most haunting and memorable track. It's not as club-friendly as the others, but to my ears it represents Attrition's essence perfectly. It also prepares you for the thirteen-minute epic “Hollow Latitudes,” described as “a story in three parts” which stitches the themes of all the other tracks into one. It drifts from a gothic/neoclassical opening to experimental noise, peaking with a low, wailing guitar and thick layers of reverb applied to acoustic and electric violins. The record ends as it began, with bone-chilling instrumental beauty – in the form of “The Internal Narrator.” Soaring synths, guitar and piano are confronted by nightmarish organic and metallic noise elements, bringing the tone of Unraveller full circle to the cinematic style of the band's horror soundtrack album Invocation, or their earlier concept album All Mine Enemys Whispers... both of which I highly recommend to fans of more experimental horror music.

Martin was right about The Unraveller of Angels marking a new phase in the band's timeline, and that phase brings new urgency and tension to their already dangerous sound. But even within the more straightforward dance tracks there's a kind of wonderful chaos at work, pushing classical and electronic instruments and human voices out of the comfort zone and into strange new patterns... but it all comes together thanks to Bowes' moody talk-sung vocals which create an otherworldly narrative, guiding you down the many dark hallways that this artist knows so well.

Attrition will begin their next world tour this month, criss-crossing Europe in the spring and summer and touring the west US coast this fall (dates and venues are being updated regularly at the band's official site), and Martin is currently working with filmmaker Daniel Gouyette on a series of music videos – a rare occurrence for this band – as well as a documentary on the making of the album. So expect to hear and see more from them soon...