Millions Of The Mouthless Dead 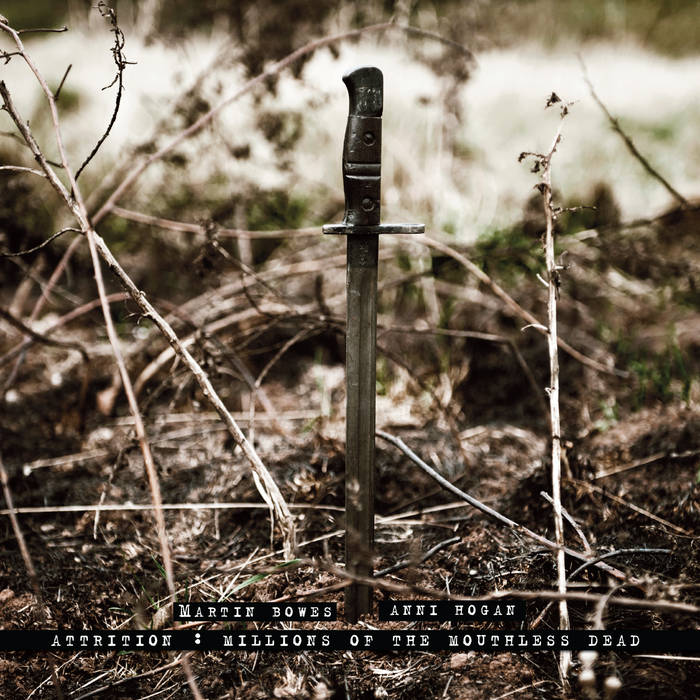 rikm A dark and brooding masterpiece, surely among the best works in a collection filled with haunting beauty and deep darkness...

Uncle Brains This album is both deeply touching and profoundly saddening. Martin Bowes' expert handling of electronic sounds and Anni Hogan's minimalist, scalpel-like piano playing are a perfect match for this sonic recreation of war in WWI trenches. Somber atmospheres and war dirges that capture/recreate those dying days of the Romantic era. Favorite track: The Third Light.

“June 1917. Ypres. Flanders. Belgium.
Private William Bowes of the West Yorks Regiment,
British Expeditionary Force, was hit by a German shell
while out working on trench defences.
He suffered a severe stomach wound.
Rescued by stretcher-bearers, his life was saved by
Canadian army medics in a front line field hospital.
He was repatriated to England where he stayed
and recuperated for the remainder of the Great War...”

William Bowes was my Grandfather.

This album is inspired and dedicated to both him and the millions on all sides that experienced the living hell that was the
Europe of 1914-18.

Martin Bowes of Attrition is a prolific artist in a very literal sense. His 30-plus year discography is expansive by anyone's standards, and he continues to release multiple albums, collaborations and remixes per year as well as working as a producer and engineer. His latest work is perhaps his most poignant and powerful to date.

“June 1917. Ypres. Flanders. Belgium.Private William Bowes of the West Yorks Regiment, British Expeditionary Force was hit by a German shell while out working on trench defences’He suffered a severe stomach wound.Rescued by stretcher-bearers, his life was saved by Canadian army medics in a front line field hospital.He was repatriated to England where he stayed and recuperated for the remainder of the Great War…William Bowes was my Grandfather.”

Inspired by his grandfather's role in the first world war Bowes has enlisted the help of pioneering artist and musician Anni Hogan, as well as a guest appearance from ex-Kraftwerk hand Wolfgang Flür to explore his personal connection to the conflict. The result blends Bowes' dark ambient industrial soundscapes with Hogan's chilling piano with powerful readings of war poetry in various languages.
Mechanical noises, chilling pianos, strings and ambient electronics combine to create bleak and nightmarish soundscapes to evoke the wholesale horror and destruction of the war. Tracks such as 'Divine Providence', 'Mincing Machine', 'Shell Shock', and 'The Mouthless Dead' cutting deep with a balance of noise and dark ambience for chilling effect.
These are counterpointed by the avant garde approaches of pieces such as 'Into Cleanness Leaping', 'Heimatschluss', 'A Madman's Flash – As Quiet As', 'A Madman's Flash – All The Mad Men', and 'A Madman's Flash – Krieg' which frame spoken word readings with haunting piano and atmospheric synthesizers for an affecting listening experience.
The production is of course up to Bowes' usual high standards with a fine balance between ambient and noise running throughout that creates an unnerving and oppressive atmosphere throughout. Yet it is very accessible. It has been made to be heard as much as it has been made to evoke the horror of the war, and it does both very well.
Along with Einstürzende Neubauten's recent album 'Lament', 'Millions Of the Mouthless Dead' is one of the most powerful albums about the First World War to date. It is dark, chilling, and compelling. But best of all it is effective. With the war only recently out of living memory, the centenary years of 2014-18 take on a particular significance that is reflected in the album.

Dalton Trumbo wrote of the uncertainties and horror of war quite effectively but Martin Bowes and Anni Hogan bring it out palpably in sound. With his oppressive arrangements and her jarringly effective piano the pair of them create a world of unending smoke, mud and thundering guns. I’ve often read that it was the waiting which was the worst part of World War I; a fascinating series I discovered recently narrated by Kenneth Branagh has interviews with surviving veterans who pretty much say this and quite a lot more. The statement I liked best would be “anyone… who says he wasn’t afraid to go over the top… is a damned liar.” William Bowes no doubt would have agreed. But tempting as it is to broaden the scope of this review, ‘Millions of the Mouthless Dead’ is not an album about this war on a grand scale, it is a personal account. One drawn out of the echoing tides of time.

A voice amidst the chaos, one man’s experiences. This tale isn’t told by the man himself, but rather through the music his grandson Martin Bowes has created. The barbed wire, the endless rattle of the machine guns calling to the cattle; with minimal electronics driving the narrations and instrumental interludes you begin to get a feel for the day to day grind at the front. Nicely placed broadcasts are manipulated so that they sound as though they’re coming right off that phonograph and out of the megaphone. French, English and German text is read by native speakers and it amazes me that he was able to keep this under wraps for well over a year. But somehow this is just par for the course, after all what was more secretive than the activities of those nations involved in the conflict. Keeping the populace in the dark was a requisite.

The actions of the individual are what brought about the first World War. One man on the trigger, or in the case of Bowes’ grandfather: one set of hands in the munitions factory. Again, Trumbo writes in ‘Johnny Got His Gun’ about his main character in hospital with only his thoughts to preserve his sanity reflecting on that single shell being lovingly polished in a German factory that he had a date with. It’s fatalistic, yes, but consider that one of the formats this record comes as is a bullet shaped USB drive… a bullet with one’s name on it indeed. It becomes clearer with each listen I give ‘Millions of the Mouthless Dead’ what the real objective of the Great War was and just how lucky anyone who came out the other end of it were.

Every single time you begin to let your guard down or entertain any thoughts of life those guns rumble yet again; strewn across battlefields the multitudes were cut down… Attrition, I feel, have been spending their entire career building to the release of this album. If there’s one constant I hear again and again about WW1 it’s that towards the end of it things had come down to a stalemate which could only be broken through a war of attrition. Inch by inch the bloody ground grew even bloodier; Joe in his trench and William shoring up defenses outside of his, one character fictional the other real but the outcome remained the same: in 1917 the world just hadn’t had enough killing yet and so more young men would be thrown to the machines. Sanity no doubt became a precious commodity for those involved.

Anni Hogan’s subdued yet forceful playing I feel is meant to personify this inner struggle and she acquits herself well, the dread and tension cascade down upon you like a dogfight far up in the skies while whistling projectiles bring death and destruction into the midst no matter how fortified and dug in your position is. Did she compose these parts with shattering glass in mind? The effect is immediate and rattles one’s nerves expertly.

I think history has shown the leadership of these armies were anything but experts, rather they seemed to aspire to lofty deeds being put down in songs or the ceremonial praise of the monarchs. All for empire, yet you in the trenches will get none. For men such as William Bowes, this was a matter of life and death which no amount of patriotism could obscure. And on that subject, this release is also a timely one as once more those same saber rattling ‘men of influence’ are baying like ravenous pigs for the blood of others. Flags are being unfurled and speeches prepared… watch out, little guy, they mean to come for you soon.