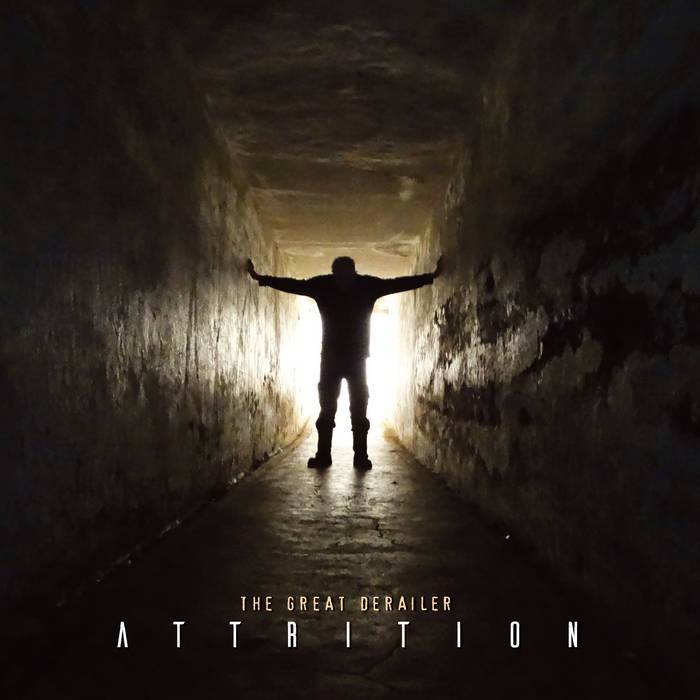 rikm New music from Attrition is always cause for celebration, and "The Great Derailer" comes at a time when new music and new songs are especially appreciated. An excellent addition to an already exceptional catalog of work...

The Great Derailer
c/w
The Pillar I (For Ossington)

The first single from the upcoming ATTRITION album, due in 2022
"The Black Maria"

Available as a digital download, Streaming through all the major platforms, or as a Limited CD single and as part of a CD/T-Shirt, Pin/Badge and Incense package.

You will also find the first 4 remixes as bonus download only tracks...more of those to follow with the second single and album release...

A big thank you to the remixers ... Planetdamage, Noirmagnetik, Dead Happy and Khost

"The offset of Elisa Day's operatic grandeur, Emese's bluesy and soulful melody, and Bowes' subdued yet throaty and guttural growl... such a layering of disparate vocal styles into such a disturbingly appealing package is unparalleled and adds to Attrition's singularity and longevity.
Add to that a wispy helping of pulsing technoid bass and rhythms, Vancorvid's shrill violins to provide a rather ghostly and almost Victorian ambience, the discordant guitar and Anni Hogan's lonely pianos give the instrumentation an urgency befitting any dance floor while still nuanced in its production to demand deeper listening. There's a reason Attrition has lasted this long and continues to standout among the myriad of goth/industrial…”
Ilker / Regen magazine


ATTRITION
‘The Great Derailer’ c/w ‘The Pillar I (for Ossington)’

When asked about their dark art Joy Division said they were influenced by their post-industrial surroundings. I wonder if Coventry’s oppressive brutalist architecture had a similar effect on Attrition’s Martin Bowes because he’s been unsettling listeners for 40 years by illuminating the dark recesses of the human psyche with flickering candlelight. To mark Attrition’s fourth decade this new two track EP is released to highlight the bands Licht und Blindheit.

Opening with a spectral wail, a piece of electronic voice phenomena, as if recorded at a séance and counterpointed by ice cold tinkering keys that stand stark, the title track is a truly disconcerting piece of music. The arrival of an upbeat central bassline, which in itself is very catchy, but it is the smorgasbord of sounds that swirl around, like apparitions circling an Ouija, that give ‘The Great Derailer’ its sinister feel. Voices are taken out of context, like a musical cut and paste, and their meanings are changed and thus they take on more indistinct and suggestive tones. Best listened through headphones it’s a multilayered affair, with Martin scrawling sound on every available surface as it swarms to the point of overload as different aspects are brought forward and then foregrounded.

This EP can be viewed as different sides of the same coin as ‘The Pillar I (for Ossington)’ takes a more dark ambient approach. Sorrowful viola and a voice like a female hazzan almost cries against a backdrop of a cattle train rattling into the distance. It’s a track that breathes as it ululates with the voice that ebbs and flows. A discombobulating, cinematic soundscape the images it creates will be personal to you but to my mind it draws parallels to the Holocaust and positions the track somewhere between Steve Reich’s ‘Different Trains’ and the Swans ‘Soundtracks for the Blind’.

Attrition are not always a comfortable listen but they’re always rewarding. Embrace the darkness...

When you talk about industrial electronic noise acts like Coil, Throbbing Gristle and In The Nursery, you have to add Coventry band, Attrition. January saw the release of a new single, “The Great Derailer” from the album, The Black Maria, which is due out in the coming months.
Martin Bowes is the one member who has been continuously part of the group from the beginning in 1980 and has always steered Attrition to being a much lauded and still viable act now, even in 2020.

Of course the title song is first, “The Great Derailer” which is exactly five minutes long and begins with the jangling of guitars, juxtaposted with female vocals. Bowes‘ gutteral tones gravel along with Emese Arvai-Illes as the female lead, almost floating above Bowes. Who is “The Great Derailer“? There is a sound bite that seems awfully like one U.S. president called Trump. The violins are discordant and almost manically high pitched with fervour, off-set by the mellow tones of the cello, all heightened by the soprano wailing, rising and falling. Whoever this Great Derailer is, they revel in the turmoil created by the direputable and unruly.

The B-side is “The Pillar (For Ossington)“. Ossington Subway Station is located in Toronto, Canada and also the place that Martin made field recordings of the trains as they pass by and stop. This is a much more sublime piece, almost clasical in nature, with female vocals like the calling of the sirens to lure you into their world within a hurtling steel carriage.

My first real introduction to Attrition was in the early 90’s with the compilation Recollections ’84 – ’89, put out by the label Projekt, who are well known for their electro ambient releases, even though I had heard the odd song here and there. As leaders in their field, they have released some powerful albums full of creativity and dark beauty.
Now in 2020, on the Two Gods label, Attrition is about to grace our ears again. Martin Bowes is threatening us with another single and new album….. and I for one can’t wait to hear what comes next.