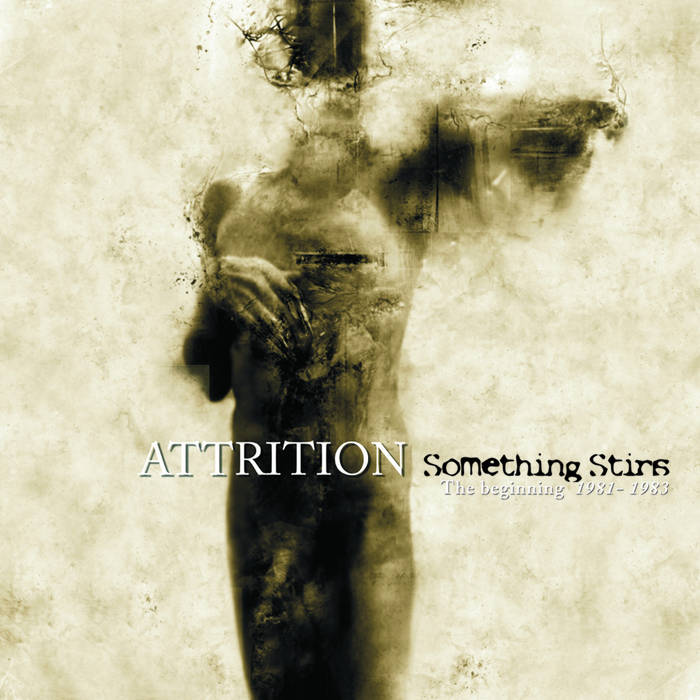 Es Lessin, Film Freak The absolute best era of Attrition and one of my very favorite of their many collections/albums. Favorite track: Birthrite.

Something Stirs. review from Sonic Curiosity

This CD from 2006 features 47 minutes of dark industrial music culled from ancient compilations and old cassette releases by the band. Included are five previously unreleased tracks, three of them live from the General Wolfe in Coventry in 1981. These selections represent the band's early period.
Attrition is: Martin Bowes, Julia Waller, and Ashley Niblock.

The electronics are sparse but haunting, jarring and dire. Angry diodes screech and gurgle, producing an environment of eerie pulsations seasoned with growling noises of unearthly demeanor. Scraping sounds rise and claw for the audience's faces, while basic synthesizer bellows grumble with contention.
Waller's vocals convey a desperation that rings from the cemetery, rich with ghostly timbre. Her lyrics are concerned with taboo subjects and forbidden affection. Death fuses with emotion as she croons with emphatic determination.
Several tracks feature spooky basslines that generate a thumping undercurrent for the angry electronics. Percussion is present in a number of songs too, establishing mechanical rhythms overlaid with more forceful tempos. Sometimes the beats throb with hollow retorts, as if sounding from deep in a well.
The compositions are melodic, but focused to agitate more than enthrall. The mood evoked by this tuneage is surly and dissident. The live tracks are abrasive and reminiscent of an angrier Joy Division.

This music will appeal to fans who miss Throbbing Gristle and the good old days of Coil.

New sounds from Mavi, Ivy Sole & Moderator, plus AJ, the One joins the show, for her latest release