The Attrition Of Reason 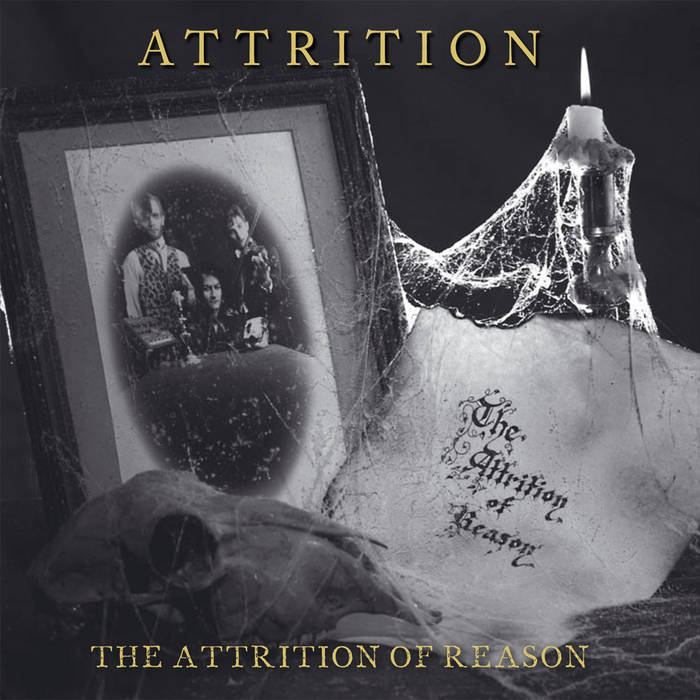 rikm "The Attrition of Reason" is an excellent example of Attrition's early 80s experimental electronic work. There's still a concept of songs as discrete pieces here, but boundaries are pushed in terms of the structure and approach to songwriting, resulting in a fascinating and impressive musical blueprint that the band would explore and refine throughout their later work.

The Entrance i am OBSESSED with ATTRITION... Favorite track: The Next Day.

Martin Bowes' remastering and reissue project of his Attrition albums continues with the reissue of his debut album, The Attrition of Reason (1984). Created in a time where gothic music was more distinctive – and popular – than it is now, Attrition was the experimental side of a wider genre. Remember the success of Cure, Bauhaus, The Damned, and others of that ilk, and you'll remember how much Gothic played a part in that time. While Attrition wasn't as popular as the aforementioned bands, their impact, nevertheless, gave rise and influence to much of the industrial music popularity that sprung up later in the 80s.

Martin Bowes brought sounds and elements into the construction of his songs to create a strangely satisfying and truly gothic experience and he has evolved that Attrition sound in the years that followed. In order to fully realize the Attrition sound, Bowes managed to stay outside the confines of larger labels so as to not compromise the integrity of what he wanted his audience to enjoy. A few years later, Attrition would find a suitable home in Projekt Records where, within the realm of a few years, a large collection of his Attrition music would become accessible to a US audience.

Marrying gothic with late night horror film creep, The Attrition of Reason delivers, first by way of its cover and then by its music, the look and feel of a walk through a ancient house of evil. The album's opener track, “Day I Was Born,” sounds like the ghosts of the past communicating by singing in a mix of banshee backing vocals and a monotone voice, accompanied by eerie keyboards not uncommon in classic horror. But to pin the entirety of The Attrition of Reason on this board would be wrong. While the elements of horror remain throughout the album, there are songs that explore the juxtaposition of sounds to excellent effect and making for an album of note.

On “You Will Remember Nothing,” there is an element of a suspenseful movie score with a consistent looping electronic track and whispering, ghostly, movie-like vocals (voiceovers?). Other songs, like the highly experimental instrumental cut “Take a Walk,” with its dance beats, and its sister, “Beast of Burden (take a walk),” also a dance track, add to the heart of this album. Added to this reissue is the 4-track EP, The Voice of God (1984). This EP's collection of songs are all danceable, sounding more like the 80s period of pop tunes that you remember.

The Attrition of Reason stays true to its gothic roots and explorations of horror in its 8 tracks. That element was explored by bands like The Cure but never cut into the arm as deeply as Attrition does. With this reissue's expanded addition of the 4-song EP, The Attrition of Reason is a greater collector value. Fans should be quite happy to get this next remastered disc for their Attrition library.