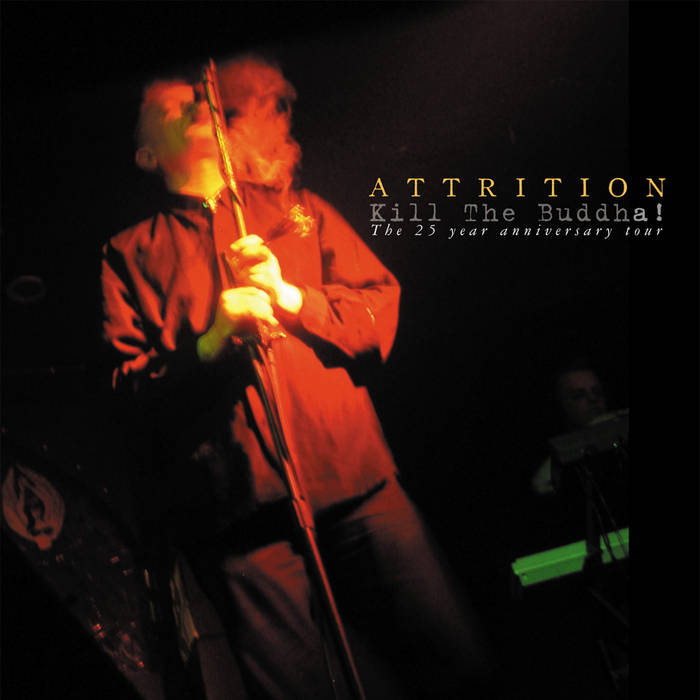 Live recordings from the 25 year anniversary tour of Europe, the USA and Mexico over 2006 - 2007. Originally released in 2009 on Projekt records in the USA and Two Gods for the rest of the world.

Kill the Buddha! review from fearnet.com

Last year I introduced some of you open-minded souls out there to the work of amazing electronic group Attrition – the twisted creation of UK artist Martin Bowes – whose acclaimed album All Mine Enemys Whispers was one of the most chilling and immersive sonic experiments of that or any year. Now it's time for an entirely new experience, as Attrition has released their new 25th Anniversary live CD – which represents the band's impressive history and hints at new, even more sinister directions in the years to come.

Recorded during the band's 2006-2007 “Tearing Arms From Deities” world tour – which included stops throughout Europe and North America – the nine performances captured on Kill the Buddha! feature a few of the band's earlier works (as a sort of precursor to the Gothic/Darkwave movement, before anyone knew what to call it), but is built primarily of cuts from their more recent release Dante's Kitchen . The tracks were all culled directly from each show's live sound mix, recorded on mini-disk and remastered by Bowes himself. The result is a completely new spin on the band's immersive sonic landscapes, with an injection of immediate energy and spontaneity, fury and beauty, that feels almost monolithic in scope while managing to steer clear of the self-indulgent tendencies than can dog so many bands of the Gothic variety.

For this tour, Bowes shares onstage vocal duties with operatic American singer Laurie Reade, and turns over most of the offbeat electronic instrumentation (his own forte in the studio) to several other keyboardists, including frequent Attrition collaborator Ned Kirby (of the band Stromkern). The result is a layered, haunting, hypnotic collection of genre-defying soundscapes that alternately seduce and frighten.

“Favourite Things” sets the mood with creeping, crawling electronic drones accompanying a spoken tally of the contents on a mad scientist's workbench (“Sulfuric Acid... Sodium Cyanide... rubber gloves... a gurney... restraint gear...”) and gives way to the throbbing analog beat that begins “The Head of Gabriel,” the first in a cluster of Dante's Kitchen tracks and a solid example of the band's latter-day output. Bowes' guttural whisper holds down the low frequencies while Reade's angelic intonations soar, loop and reverberate across the sound field, while the entire mix is punctuated by knob-twiddling synth effects and sprinklings of samples. It's followed by the title track from the same album, a more drum 'n' bass infused version of a similar formula. “Dreamcatcher” adds to the sultry danger with its lurching, Middle Eastern electro-bass rhythm and a cool repetitive spoken line from Bowes.

Next up are two songs from 1997's Etude: “A'dam & Eva” is filled with dark carnival atmosphere, thanks to its waltz-time organ accompaniment to Reade's lyrical material – this time Bowes switches to the background to provide eerie demonic accents. “I Am Eternity” is essentially a shoegazing trip-hop number – albeit with more evil intensity than, say, Portishead – and features a seriously catchy keyboard arpeggio line. Then it's ahead to Dante again with “Two Gods,” propelled mainly by Bowes' dark murmurings and a groaning bass line, surrounded by a swarm of electronic insect buzzing.

“The Mercy Machine” (from The Hidden Agenda ) is a more hard-driving and dance-friendly piece, with deep, bouncy bass, more pronounced percussion and a dreamy, melancholy vocal quality that demonstrates just how much influence Bowes has lent to the whole Darkwave thing. “The Long Hall” is another up-tempo piece with a jungle-esque rhythm loop, which builds momentum to a point, plateaus in trance mode for a while, then kicks in more frenetic beats to an orgasmic, breathless climax.

For a fun closer, “November 18, 2006” is taken from a live tribute to Martin, with Reade crooning a very sultry “Happy Birthday,” but the whole event is turned slightly creepy by a deep synth drone in the background. Think of it as a sexy alien party for the damned... and now that I think of it, that's a perfect description of the Attrition experience.

Though not for all tastes, Attrition has managed to secure a solid niche audience for a quarter-century, all the while resisting categorization despite recognizable elements of early industrial, dark ambient and trance. Come to think of it, Martin Bowes has probably influenced most, if not all, of those genres himself. There's a damn good reason why this group is still around, and this CD is a cool way to find out.