by ATTRITION with AUDIO LETER 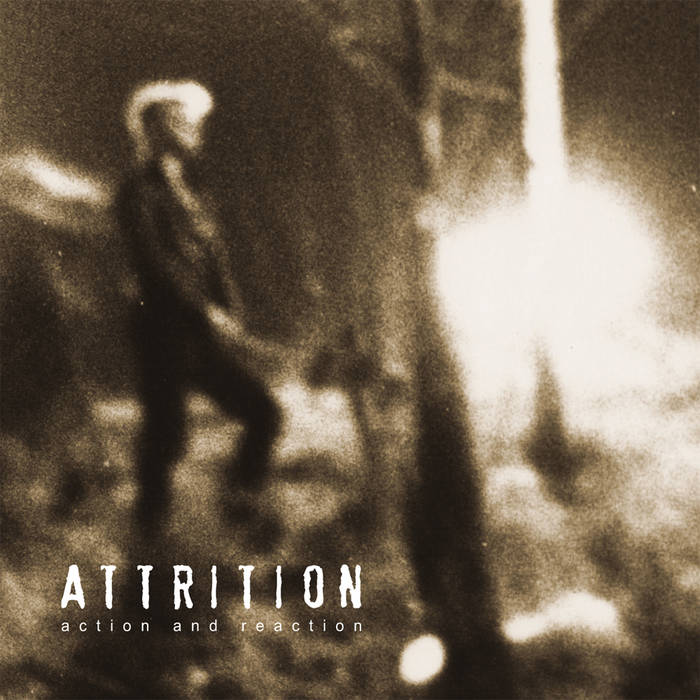 A collaboration between ATTRITION and Audio Leter from Seattle, USA. originally released on Cassette in 1983. This is the Two Gods label remastered reissue.

Attrition delve into their archive to unearth this early experimental jam session from 1983.

Considering that Attrition have always been on the cusp of the acclaim, it's rather amazing that this venerable British act continues to slog onwards. A key player in the genre who never gets proper credit, they stand nearly alone as one of the few original "industrial" cult acts that are still mercilessly active. Since their inception in 1982, their soundscapes have covered everything from folk to industrial, tribal to even ambient. Action and Reaction is a document from their formative years; culled from 1983, it is a collaboration with a long-defunct American project called Audio Letter. Unlike their cinematic two-track debut from the previous year, Action and Reaction is a collection of shorter pieces. According to the liner notes, the first half of this disc contains tracks begun by Attrition and completed by Audio Letter, and vice versa for the second half.

Re-released on their Two Gods label, and re-mastered by Attrition's mastermind, Martin Bowes, the recording itself sounds surprisingly clear for its age. A noodling enigma, "Inside Outside" is an odd start that only later makes sense after digesting the whole. Guitar and its bass sibling titter, ping, and mutter confused, their puzzlement echoed by the duck-like din of dissonant trumpet and occasionally punctuated by cardboard box bongo woofs. Though still following the avant-garde path, "Talkback" is quite different; it is like a conversation between an experimental jazz saxophone and a seventies television commercial. Age-faded announcers gleefully recite monologue fractions while their sax squeals and chirps like an irate R2-D2. Beneath this argument in noise, synths putter and drum machines click, but their presence seems rather inconsequential and ignored. Closing out the first half of the disc, "The Christening" is certainly the most dynamic relic amongst the eight, mostly thanks to Sue Ann Harkey's tortured operatic melodrama, as the instrumentation once more is murky and abstract.

The constructions on the second half are a little bit more consistent. Sounding like a flu-borne hallucination, "No Ending" finds Harkey's personality bisected a between deep monotone and a trilling falsetto siren as she half reads and half off-kilter trills through what sounds like medical documents. Musically, she is accompanied by the loose pluck of tin guitar, abrasive waves of synth, and slow motion ear piercing explosions of metallic noise. Harkey's confrontational presence is absent during "Critique of Leisure Consumption," where guest Deran Ug'ly resides at the microphone under the given title of "orator." Over a nausea-inducing sea of plucked guitar and hooting and bellowing tuba-like whales, Ug'ly speaks mechanical, blurred, and stilted of the "show being over." However, there is the final piece, "Bluegrass Xmas," which certainly does not resemble its title at all, a mess of hand drums, off-key woodwind noises, and cymbals.

In summary, Action and Reaction is an interesting artifact, but one that is designed to sate avid Attrition collectors more than it is a tool that could be used to gather new fans. Perhaps parties who name-check artists like Nurse with Wound, early Coil, or Diamanda Galas might find these avant-garde experiments of greater interest than their later, more harmonic works, as may prove fairly interesting to someone with an ear for early experimentalism. It cements the fact that Attrition's double-decade scope is epic, and is certainly an interesting (albeit challenging) chapter in this band's lengthy career.